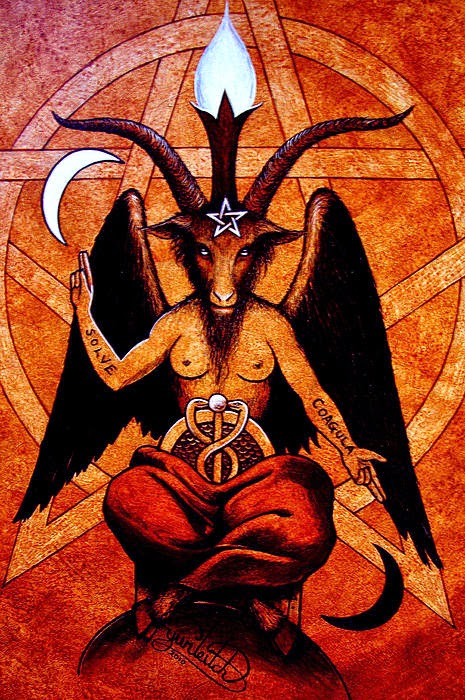 The Baphomet we recognize today is a winged goat with a masculine torso and breasts; he has a blazing torch between his horns, and cloven feet. Adding to the confusion, one arm is male and the other is female, and all in all this has become a real bogeyman of a symbol, inspiring fright and terror.

The image made its first appearance relatively recently, in Eliphas Levi’s Dogma and Rituals of High Magic (1854). Although Levi intended the creature (also called the Goat of Mendes) to be an idealized symbolic form, an amalgam of images from all disciplines including the Kabbalah, he actually created something that looks far more terrifying than he may have originally intended. The picture influenced illustrations of the Devil, not only in Tarot card illustrations but also among latter-day rock bands and, as already mentioned, among Satanists.

Baphomet himself was first described at the trials of the Knights Templar, centuries before Levi’s interpretation. When the Order began in the twelfth century, it was designed to protect pilgrims traveling to Jerusalem. Because the Knights were exempt from taxation, they amassed a huge amount of wealth and, consequently, power. When they became a threat to the establishment, they were persecuted, and part of this persecution included accusations of heresy including the worship of a peculiar looking goat-headed creature.
Posted by Tukang Warta
Share to: