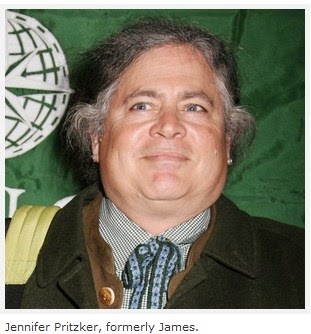 articlemostwanted - Forbes has released 400 list of richest Americans at 2013, there are 48 women in the list but one of them is special She is transgender female called Jennifer Pritzker who became world’s first transgender billionaire!

Formerly known as James, Jennifer Natalya Pritzker member of Pritzker family. She is one of 11 billionaire members of the extended Pritzker family on the FORBES list. They continue to control publicly-listed Hyatt Hotels and sold a majority stake in industrial conglomerate Marmon Holdings to Warren Buffett‘s Berkshire Hathaway for $4.5 billion in 2007. Estimated net worth of $1.7 billion are belong to their heiress.

Crain’s Chicago Business first broke the news in late August and a spokesperson for Pritzker’s Chicago-based family investment office Tawani Enterprises confirmed to FORBES, noting that the name change may not be legally finalized until the end of October. The statement provided to Crain’s reads:

“This change will reflect the beliefs of her true identity that she has held privately and will now share publicly. Pritzker now identifies herself as a woman for all business and personal undertakings.”

Pritzker is a retired Army lieutenant colonel with 11 years active duty, followed by 16 years in the U.S. National Guard. Earlier this year, she gave $1.35 million to the Palm Center to create the Transgender Military Service Initiative. The goal of the project is “to sponsor state-of-the-art scholarship on transgender military service, and to enhance the quality of public dialogue.”

Pritzker also donated $25 million in April to Norwich University, the school that established the Reserve Officers’ Training Corps (ROTC). And in 2011 she founded the Pritzker Military Library, a research museum dedicated to “the Citizen Soldier in the preservation of democracy.”