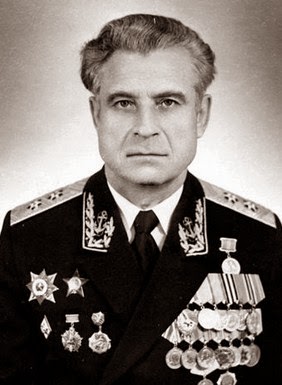 articlemostwanted - At the very tense of the Cuban Missile Crisis 50 years ago, Vasilli Arkhipov as second-in-command of the B-59 Soviet submarine denied to be of the same opinion  with his Captain's order to blast of torpedo with nuclear war head adjacent to US warships and setting out what might well have been a global catastrophe terminal superpower nuclear war.

The US had been deliver depth bomb nearby the submarine in an action to make an effort to force it to surface, unknowing it was bring nuclear bombs. The Soviet officers, who had missing radio contact with Moscow, came to terms on that World War 3 had begun, and 2 of the other officers that agreed to ‘destroy the warships out of the surface of the water'. Arkhipov rejected to agree - unanimous agreement of 3 officers was needed - and world should thank him that the world was saved from being destroyed by nuclear warfare.

His astonishing story at the end being told - the BBC is airing a documentary on it.
The world really intense In October 1962. On the edge around the Caribbean Sea water, just a few kilo meters from the Florida shoreline, the two great superpowers country at that time were at a stand-off. The submarine surrounded by twelve US destroyers, which were depth-charging the submarine to drive it to the surface of the sea, Captain Vitali Grigorievitch Savitsky who command the submarine panicked. He unable to reach Moscow and in fear that war had begun, he commanded the release of his submarine’s torpedoes with nuclear war head! As the two sides inched seriously close to nuclear war—far closer than the world ever knew before–just one brave man stood between Captain Savitsky’s command and mutually assured destruction of the scene.
The documentary about what has been happened at that time has been filmed by many production houses. But you can see one of them here: