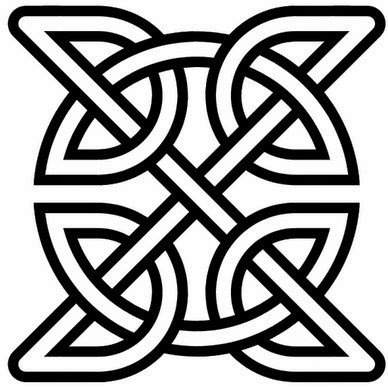 articlemostwanted - One of the most distinctive decorative features of Celtic artwork and architecture are the beautiful constructions of Celtic knotwork. It adorns stonework, illuminated manuscripts, and jewelry; the knotwork has left a distinctive trail that clearly shows all the places in the world that were visited at some point by the Celts.

The knotwork itself would appear to be a purely decorative device. If at one time there were specific symbolic meanings attached, then these have been lost over the centuries. Intertwining shapes and lines, however, generally point toward ideas of connectedness and the harmonious convergence of opposites, male and female, fire and water, Heaven and Earth, for example. In addition, any sign that can be made without the pen leaving the paper tends to have strong protective associations, and knotwork, with its continual looping and spiraling, could have been used in this way, perhaps used for amulets and talismans.

Existing symbols—such as a heart, or birds and animals—are often rendered in Celtic knotwork. In this case, the form of the underlying shape carries the symbolic meaning.

The Celtic Knot that is square in form is a protective symbol, called a shield knot.

In Haiti, there are certain seed pods called cha cha that are used to make rattles for ceremonial musicmaking in Voudon rituals. The rattle is called a cha cha, too, and the dance of the same name also comes from the name of the seedpod. 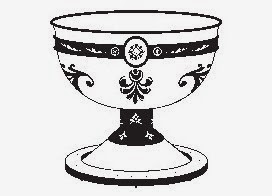 This is a cup or grail that is generally used in rituals. No matter what the religious or spiritual persuasion of the celebrant, a chalice of some

form is used, whether it be the highly ornamented vessel of the Catholic Church or the simpler wooden cup favored by some pagan groups. The chalice itself is symbolic of water or of the Spirit, and is used as such in the suit of Cups in the Tarot, for example. The chalice is also a universal symbol of the feminine aspect because of its shape, its use as a vessel, and its link with water.

Eastern religions use a kind of bell, called a Drilbu, in the place of a chalice. 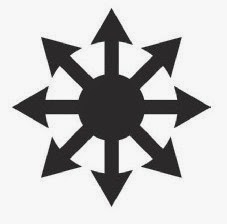 The Chaos Wheel, or Chaos Star, is a wheel constructed from eight arrow-headed spokes. Representing the notion of infinite possibilities, the symbol is a recent addition to a veritable galaxy of meaningful shapes. Designed by science fiction writer Michael Moorcock, it has been adopted as an emblem by exponents of Chaos Magic, the contemporary branch of magic inspired by the works of Austin Osman Spare.
Posted by Tukang Warta
Share to: