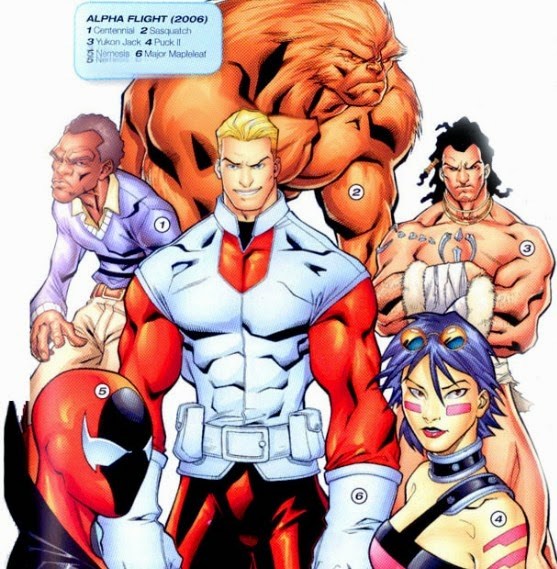 articlemostwanted - Conceived as the Canadian government's answer to the recent spate of superhuman activity within the united states, alpha flight was the brainchild of James MacDonald Hudson, soon to be known first as Vindicator, then as Guardian. Inspired by the Fantastic Four, Hudson and his wife Heather convinced the Canadian government to found Department H, which would be tasked with assembling a team of super humans indigenous to the Great White North.

Wanted: A Leader
The project was implemented using a three-tiered training system: new recruits or those whose powers proved unstable would be assigned to Gamma Flight. Those whose command of their abilities required further training formed the basis of Beta Flight. The front line, the active members whose job it would be to rout any superhuman threats to the nation, were Alpha Flight.

Hudson intended that the man known as Logan (Wolverine) or Weapon X, whom he and his wife had nursed back to sanity after years living in the Canadian wilderness, would lead Alpha Flight. However that task fell to Hudson himself when Logan was recruited by Professor X to become a member of his X-Men team.

Alpha Flight endured a rocky relationship with the Canadian government, being cast aside, then drafted back into military service. And while the Beta and Gamma Flight units produced some heroes who went on to serve with Alpha Flight, such as Puck, the programs were perverted for evil purposes, forming the nucleus of the sinister Omega Flight, Alpha's opposite number. Still, the members of Alpha Flight soldiered on, through deaths and resurrections, strange transformations and sudden reversals-loyal to their mission of protecting their homeland.

When the rest of Alpha Flight had been abducted by the alien Plodex, Sasquatch assembled a new, oddball squad. This team included the 97-year-old Centennial, Major Mapleleaf, the son of a World War II-era hero, the deadly Nemesis, PUck II (Puck's daughter), and the mysterious Yukon Jack. Whether these heroes will stay in Alpha Flight remains to be seen.