10 Weird and Extreme Talents in the World

1. Get Kicked in the Crotch without Injured 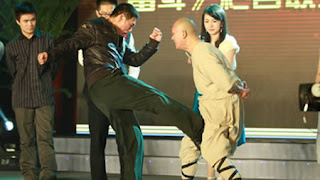 Yong Hsueh is a Shaolin monk, appearing on the Chinese version of Britain's Got Talent to demonstrate his ability to be kicked in the crotch without injury. Steel crotch Kung Fu is an ancient art, with roots stretching back to ancient China. “It's a practice to strengthen and protect the male genital organs so there is less chance they are injured or incapacitated in battle.”
Cross, a man who witnessed the scene is shocked when some members of the panel were invited to kick  monk’s crotch. Remarkably, he just bowed and smiled when he got kicked.

Yong said that this skills can only be learned by a student that began in childhood. The secret, he continued to practice pushing the testicles into the body to be protected and unharmed.

2. Stretch the Skin for More than 6 inches 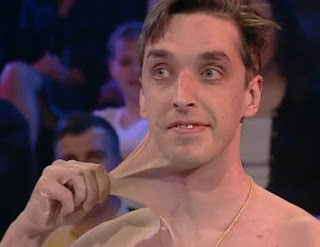 Garry Turner (UK), better known as the Stretchy Skin Man, is able to stretch the skin of his stomach to a distended length of 15.8 cm (6.25 in) due to a rare medical condition called Ehlers-Danlos Syndrome, a disorder of the connective tissues affecting the skin, ligaments and internal organs. 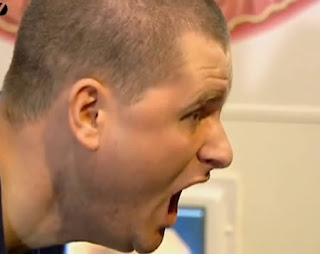 Paul Hunn is someone who has the ability to burp at 110 decibels. He achieved the Guinness World record for the loudest burp in the world and The New Paul O' Grady Show, London, (UK) on 24 September 2008.

4. Rubber Man Squeeze through the Head of a Tennis Racquet 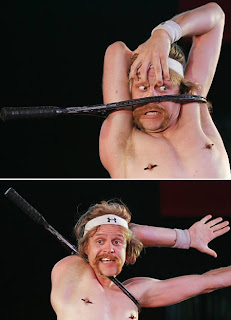 Captain Frodo has a very strange and unique talent. Her body is flexible and can be inserted through a 10-inch diameter tennis racquet. He was a contortionist in La Clicks, a circus freak and host of unique attractions such as sword swallowing and so on.

5. Pull a Minivan Using His Eyelids 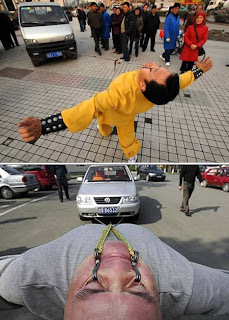 Stuntman Xie Zhongcai in Hefei who came from China's eastern Anhui Province has the ability and tremendous strength. He can pull a car with only his eyelids. 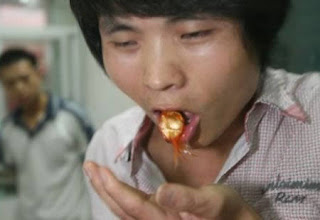 Liang Yuxin a Chinese nationality and Xia Mei had surprised doctors with his exceptional abilities. He can throw up anything out of his belly, like a live fish to a 50-inch chain.

Liang has taken to regularly swallowing fish and is now talking about going for the Guinness World Record in coin-swallowing. “The record is ten by a man in Britain and I can do 11,” he said.

7. Can Squirt Milk from His Eyes 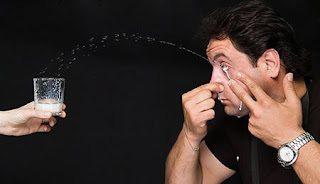 Ilker Yilmaz might just hold one of the world's most bizarre world records. The Turkish construction worker poured milk into his hand, loudly snorted it up his nose and squirted it 9.2 feet out of his left eye in what he hopes will be recognized as a new world record.

8. Plays Two Recorders With Her Nose 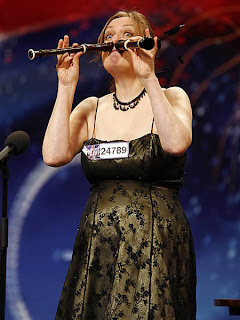 Claire Hawes appearance in Britain's Got Talent made judges speechless after she showed off an incredible ability with her instruments. Not content with playing an instrument, she played two at once. Remarkably, she blows the recorders with her nose. 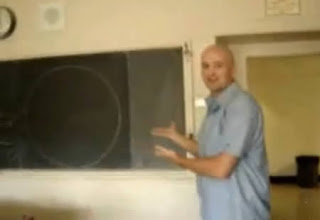 The professor was Alexander Overwijk. He can draw a perfect circle with a diameter of 1 m by hand in less than a second. He drew a circle without the help of a bow or other tools.

10. Can Fit an Entire Coke Can in His Mouth 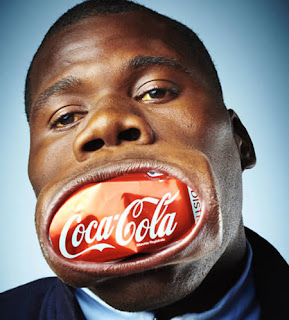 Francisco Domingo Joaquim got a Guinness World Records as having the mouth like a rubber. He can put a can into his mouth. Her mouth stretched by 6.69 inches long.

20-year-old youth record come from Sambizanga, Angola. Reportedly, he became famous after showing off his talents at local markets and football games.

Do you have any extreme talents that can fit in this list? lol
Posted by Tukang Warta
Share to: