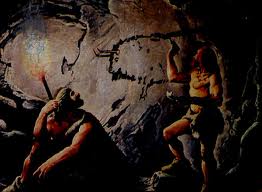 Cro-Magnon was a population of early Homo sapiens dating from the Upper Paleolithic Period (c. 40,000 to c. 10,000 years ago) in Europe. In their ancient cave habitations they left behind traces of ingenious stone tools, carved statuettes and figurines, and painted scenes
of striking beauty that are considered to be among the greatest treasures of human creativity.
In 1868, in a shallow cave at Cro-Magnon near the town of Les Eyzies-de-Tayac in the Dordogne region of southwestern France, a number of obviously ancient human skeletons were found.

The cave was investigated by the French geologist Édouard Lartet, who uncovered
five archaeological layers. The human bones found in the topmost layer proved to be between 10,000 and 35,000 years old. The prehistoric humans revealed by this find were called Cro-Magnon and have since been considered, along with Neanderthals (H. neanderthalensis), to be representative of prehistoric humans.

Cro-Magnons were robustly built and powerful and are presumed to have been about 5 feet 5 inches to 5 feet 7 inches (about 166 to 171 cm) tall. The body was generally heavy and solid, apparently with strong musculature. The forehead was straight, with slight brow ridges, and the face short and wide. Cro-Magnons were the first humans (genus Homo) to have a prominent chin. The brain capacity was about 100 cubic inches (1,600 cc), somewhat larger than the average for modern humans. It is thought that Cro-Magnons were probably fairly tall compared with other early human species.

It is still hard to say precisely where Cro-Magnons belong in recent human evolution, but they had a culture that produced a variety of sophisticated tools such as retouched blades, end scrapers, “nosed” scrapers, the chisel-like tool known as a burin, and fi ne bone tools. They also seem to have made tools for smoothing and scraping leather. Some Cro-Magnons have been associated with the Gravettian industry , or Upper Perigordian industry, which is characterized by an abrupt retouching technique that produces tools with fl at backs. Cro-Magnon dwellings
are most often found in deep caves and in shallow caves formed by rock overhangs, although primitive huts, either lean-tos against rock walls or those built completely from stones, have been found. The rock shelters were used year-round; the Cro-Magnons seem to have been a settled
people, moving only when necessary to fi nd new hunting or because of environmental changes. 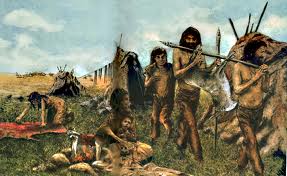 Like the Neanderthals, the Cro-Magnon people buried their dead. The first examples of art by prehistoric peoples are Cro-Magnon. The Cro-Magnons carved and sculpted small engravings, reliefs, and statuettes not only of humans but also of animals. Their human figures generally depict large-breasted, wide-hipped, and often obviously pregnant women, from which it is assumed that these figures had significance in fertility rites. Numerous depictions of animals
are found in Cro-Magnon cave paintings throughout France and Spain at sites such as Lascaux, Les Eyzies-de-Tayac, and Altamira, and some of them are surpassingly beautiful. It is thought that these paintings had some magic or ritual importance to the people. From the high quality of their art, it is clear that Cro-Magnons were not primitive amateurs but had previously experimented with artistic mediums and forms. Decorated tools and weapons show that they appreciated art for aesthetic purposes as well as for religious reasons.

It is difficult to determine how long the Cro-Magnons lasted and what happened to them. Presumably they were gradually absorbed into the European populations that came later. Individuals with some Cro-Magnon characteristics, commonly called Cro-Magnoids, have been found in the Mesolithic Period (8000 to 5000 BCE) and the Neolithic Period (5000 to 2000 BCE). But one thing for sure that the world agree that they are early homo sapiens.
Posted by Tukang Warta
Share to: