What Are Hiccups and How To Stop It 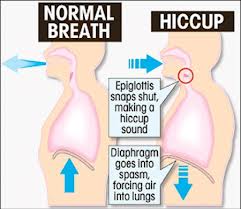 What are hiccups? For several times per minute, an involuntary contraction of diaphragm happened to our body. This situation called a hiccup. In medicine field it is also called as singultus or synchronous diaphragmatic flutter (SDF). This incident will involve reflex arc.


The reflex causes a strong contraction of diaphragm once triggered, and followed about 0.25 seconds later by a vocal cord like a “hic” sound. The normal peristalsis of the esophagus is suppressed at the same time.
Hiccups may occur in bouts or they may occur individually. The time between hiccups or the rhythm of the hiccup tends to be constant. Hiccups could stop by itself without doing anything or medical treatment needed in case of chronic hiccups.

What are the causes of hiccups?

How to stop hiccups by simple way?

There are many ways out there claimed to be the best, but based on author experiences, there is one way that 90% most effective to stop it, and this way is part of Japanese culture. How to stop it?

Take a glass of water (about 200cc), drink the water while your other hand cover your nostrils. Drink it all without breathing. Usually one try is enough and you will see the result instantly.

That's all what we knew about what are hiccups and how to stop it easily. If it did not stop by simply way, you should go to the doctor right a way!
Posted by Tukang Warta
Share to: