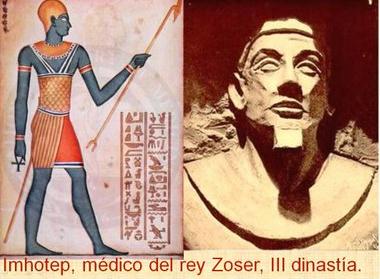 Imhotep (Greek: Imouthes) was a vizier, sage, architect, astrologer, and chief minister to Djoser (reigned 2630–2611 BCE), the second king of Egypt’s third dynasty, who was later worshipped as the god of medicine in Egypt and in Greece, where he was identified with the Greek god of medicine, Asclepius. He is considered to have been the architect of the step pyramid built at the necropolis of Saqqarah in the city of Memphis. The oldest extant monument of hewn stone known to the world, the pyramid consists of six steps and attains a height of 200 feet (61 meters).

Although no contemporary account has been found that refers to Imhotep as a practicing physician, ancient documents illustrating Egyptian society and medicine during the Old Kingdom (c. 2575– c. 2130 BCE) show that the chief magician of the pharaoh’s court also frequently served as the nation’s chief physician. Imhotep’s reputation as the reigning genius of the time, his position in the court, his training as a scribe, and his becoming known as a medical demigod only 100 years after his death are strong indications that he must have been a physician of considerable skill.

Not until the Persian conquest of Egypt in 525 BCE was Imhotep elevated to the position of a full deity, replacing Nefertem in the great triad of Memphis, shared with his mythological parents Ptah, the creator of the universe, and Sekhmet, the goddess of war and  pestilence. Imhotep’s cult reached its zenith during Greco-Roman times, when his temples in Memphis and on the island of Philae (Arabic: Jazirat Filah) in the Nile River were often crowded with sufferers who prayed and slept there with the conviction that the god would reveal remedies to them in their dreams. The only Egyptian mortal besides the 18th dynasty sage and minister Amenhotep to attain the honor of total deification, Imhotep is still held in esteem by physicians who, like the eminent 19th-century British practitioner Sir William Osler, consider him “the first figure of a physician to stand out clearly from the mists of antiquity.”
Posted by Tukang Warta
Share to: