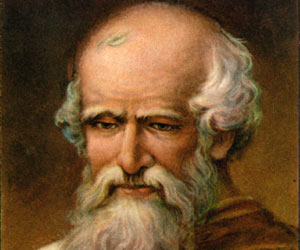 The most famous mathematician of ancient Greece, Archimedes is especially important for his discovery of the relation between the surface and volume of a sphere and its circumscribing cylinder and for his formulation of a hydrostatic principle (known as Archimedes’ principle). As an inventor he is known for various ingenious (and perhaps mythical) optical and mechanical devices, including a device for raising water, still used in developing countries, known as the Archimedes screw.
Archimedes probably spent some time in Egypt early in his career, but he resided for most of his life in Syracuse, the principal Greek city-state in Sicily, where he was on intimate terms with its king, Hieron II. Archimedes published his works in the form of correspondence with the principal mathematicians of his time, including the Alexandrian scholars Conon of Samos and Eratosthenes of Cyrene. He played an important role in the defense of Syracuse against the siege laid by the Romans in 213 BCE by constructing war machines so effective that they long delayed the capture of the city. When Syracuse eventually fell to the Roman general Marcus Claudius Marcellus in the autumn of 212 or spring of 211 BCE, Archimedes was killed in the sack of the city.

Far more details survive about the life of Archimedes than about any other ancient scientist, but they are largely anecdotal, reflecting the impression that his mechanical genius made on the popular imagination. Thus, he is credited with inventing the Archimedes screw, and he is supposed to have made two “spheres” that Marcellus took back to Rome—one a star globe and the other a device (the details of which are uncertain) for mechanically representing the motions of the Sun, the Moon, and the planets. The story that he determined the proportion of gold and silver in a wreath made for Hieron by weighing it in water is probably true, but the version that has him leaping from the bath in which he supposedly got the idea and running naked through the streets shouting “Heureka!” (“I have found it!”) is popular embellishment. Equally apocryphal are the stories that he used a huge array of mirrors to burn the Roman ships besieging Syracuse; that he said, “Give me a place to stand and I will move the Earth”; and that a Roman soldier killed him because he refused to leave his mathematical diagrams—although all are popular reflections of his real interest in catoptrics (the branch of optics dealing with the reflection of light from mirrors, plane or curved), mechanics, and pure mathematics.

According to Plutarch (c. 46–119 CE), Archimedes had so low an opinion of the kind of practical invention at which he excelled and to which he owed his contemporary fame that he left no written work on such subjects. While it is true that—apart from a dubious reference to a treatise, “On Sphere-Making”—all of his known works were of a theoretical character, his interest in mechanics nevertheless deeply influenced his mathematical thinking. Not only did he write works on theoretical mechanics and hydrostatics, but his treatise Method Concerning Mechanical Theorems shows that he used mechanical reasoning as a heuristic device for the discovery of new mathematical theorems.
Posted by Tukang Warta
Share to: