Daredevil - The No Fear Factor Part 1 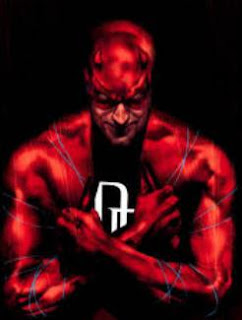 The concept of "film noir" is pretty easy to navigate once you get the clue that “noir” means “black” in French. Film noir = black film, which is accurate as far as it goes but doesn’t tell the whole story about the genre. Most American flim-noir movies were made from about 1940 to 1958, when the last of the great ones, Orson Welles’ Touch of Evil, was released. You can spot them by their unusual for Hollywood uses of shadow, light and camera position to evoke mood. Film noir mainstreamed the high-contrast visual style of German expressionists like Fritz Lang (Metropolis) and the wise-cracking, cynical anti-hero created by pulp-magazine veterans like Raymond Chandler for leading men like Humphrey Bogart and Dick Powell. Hard to say how many comics were influenced by D.O.A. or The Big Sleep (not to mention modern neo-noir films like Blade Runner), but the number’s probably in the hundreds. Daredevil was one of the first.

Doesn’t matter the medium; the things that make film noir work are a cynical, wise-cracking leading man, voiceover narration, a sassy and dangerous woman, lots and lots of paranoia, and no happy ending. Daredevil delivers them all and within 20 minutes, yet. While Daredevil isn’t an obvious cynic, he is the Man Without Fear, which is the next best thing. All fear boils down to the fear of dying. If you have nothing to live for, you have nothing to fear. If you have nothing to live for, you’re cynical. The logicians can argue the progression, but here it stays. Daredevil s a cynic. Write it on the bathroom walls if you want.

Compared to SpiderMan, Daredevil’s no King of Comedy in the clutches anymore - but Spider-Man’s a kid and Daredevil’s a lawyer, so there’s your answer. 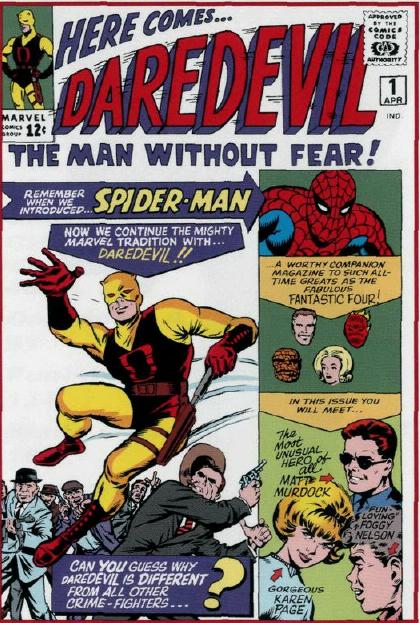 All comics have voiceover narration in one form or another. It’s storytelling.

Women dont come any more dangerous than Elektra. Not sassy, but she does get to the point, so to speak. Case closed there.

Daredevil is blind. Blindness comes with paranoia as standard equipment. You can be blind and the Man Without Fear and still be paranoid, especially because in Daredevil’s case his atomically enhanced senses let him know all the time that someone’s out to get him.

Daredevil has the chops to play film noir, including the final and most telling requirement: no happy ending. There cant be a happy ending in a Daredevil comic, or any other storytelling comic that wants to live to see another issue. For what it’s worth, Daredevil comics tend to have darker, unhappier endings than some Marvel comics. Call it playing to type.

Okay, so Daredevil is Marvel’s version of film noir. That doesn’t necessarily make it good, though the ingredients for a good comic are in place —--- a comic-friendly jumping-off point and Stan Lee at the height of his creative powers. The happy ending to this Daredevil story (which means it’s not film noir, despite the cynical leading man) is that in an appropriately gritty manner without becoming a pop—culture phenomenon; without spinning off a ‘70s TV series that used all of Hollywood’s available supply of Pontiac Firebirds, and guys in sport coats and open-collared shirts; without winding up on 30 years’ worth of kids’ underwear —a- the ingredients created something memorable. If a comic book’s success is measured by issue sales alone, Daredevil is down the list some. If it’s measured by longevity and consistency and creative quality, Daredevil takes a back seat to no character or book.

Daredevil is a classic Marvel character coming out of what Joan Didion calls a “crack in time” — a short period, maybe only a couple of months, a year or two tops, that produced a decade’s worth of great things and memorable events. Daredevil #1 appeared in April 1964, less than two and a half years after the Silver Age of comics kicked off with Fantastic Four #1. In the time between FF #1 and DD #1, Sgr. Fury, the Avengers, the Incredible Hulk, the Amazing Spider-Man, the Mighty Thor and the Uncanny X-Men debuted; John F. Kennedy was assassinated; the Beatles appeared on The Ed Sullivan Show; Marilyn Monroe died; and Martin Luther King, Jr. gave his “I Have a Dream” speech. If 1968 is ever unable to perform her duties as Miss Crack-in-Time, 1964 is ready to assume the title.

Look at any of the first six issues of Daredevil, and the first thing you notice is Matt Murdock’s costume: it’s yellow. Made from his murdered father s boxing robe in a modern telling of the tale, the yellow-and-maroon costume doesn’t look way out of kilter, like a gray Hulk or a black Spider-Man, but it begs the question: a yellow devil? Red is right, and it’s definitely reassuring to read the taut new Daredevil tales, replete with the Chandleresque turns of Kevin Smith and Brian Michael Bendis, and see that when the trouble boys show up, Matt Murdock dons the classic red with the locked D’s, same as it (almost) ever was.

For its first decade, Daredevil rarely drew the “A” team of artists and writers, whatever that means. Now we think of the top guys as John Romita, Jack Kirby and Steve Ditko because of what they did on Spider-Man and the Fantastic Four but that wasnt the way the division of labor necessarily worked in the Marvel Bullpen. There were no “A” and “B” books early on; everything was trying to find a place. If an artist fell in with a book it wasn’t permanent. He could be drawing Sgt. Fury next month, or Modeling with Millie. Romita, Ditko, Kirby, Wally Wood, Gene Colan, Joe Orlando, Barry Windsor-Smith and many others took a shot at the Man Without Fear, and they all held up their end of the bargain. Wood and Colan in particular picked up on Daredevil’s pulpmagazine origins and gave their pages a boldly stroked toughness that owed more than a little to Fritz Lang, Billy Wilder, Michael Curtiz and all the other little Teutons that made the dark movies. With Stan Lee holding up the other end, it was never hard for the artists to do their part.

As for Lee, Stan the Man had served ten hard Writing any form of literature char could be had for less than a quarter, and he brought all that experience to Daredevil, creating super-hero comics’ closest thing to The Long Goodbye. 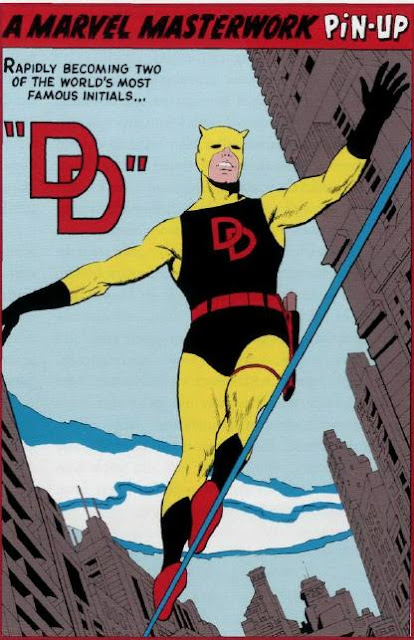 The best Marvel comics are long on character development and surprisingly short on fisticuffs. They’re a lot more Buiitt than they are The Fast and the Furious. Some of that’s by design; four pages of knock-down-drag-out make more of an impression when they re preceded by eight pages of plot. Some of it’s by necessity, Some characters aren’t best served by keeping the fight going for eight pages.

Take Matt Murdock. He was a scholarly yet athletic high-school-age pacifist, a mild-mannered youngster straight out of the Peter Parker school who was blinded by radioactive waste while pushing an old man out of the way of a truck. The waste heightened his senses, enhanced his balance, granted him a radar-like “proximity sense” and not much else. No stretchy arms, no super-strength, no molybdenum bones. Just four great senses instead of fIve pretty good ones, and a shadowy martial-arts reacher called Stick to show him how they worked. Compared to Thor, who has a doomsday tool at his beck and call, Daredevil is the original self-made super hero, the perpetual underdog with a tumbler’s skills and nothing but a billy club on his right hip. That’s right: a billy club, not a Marvin the Martian lolludium PU-36 Explosive Space Modulator. It’s the club to end all clubs part boomerang, part pool ball, part grappling hook and always at the ready, because it doubles as a blind man’s cane but its just a metal-tipped piece of wood. A blind guy who fights crime with a coffee-table leg? It takes chutzpah to pull that off for 40 years.

Like Peter Parker, Matt Murdock had the powers before becoming the hero, but was in danger of squandering those powers before tragedy intervened. In Murdock's case the tragedy was the murder of his dad, “Battlin” Jack Murdock, a boxer killed when he refused to throw a fight because Matt was in the arena watching.

After Jack Murdock’s murder, all the pieces were in place for a super hero to emerge: powers, tragedy, guilt, revenge. Matt Murdock got his revenge all right, but stood by his pledge to the old man to leave the fist-fighting to someone else. From then on Daredevil became a catch-and-release super hero, satisfied with nabbing the evildoer and letting the criminal-justice system take it from there. When Mart Murdock catches Slade, the trigger man in Jack Murdock’s murder, Daredevil turns him over to the transit police. The transit police? They’re not exactly S.H.I.E.L.D.

Daredevil’s supporting cast of good guys and bad guys is a typical Marvel assortment of ruffs, scruffs and gams. Murdocks roommate and eventual law partner, Franklin “Foggy” Nelson, is a classic second banana, differing from Gabby Hayes only in the details. Karen Page is the beautiful and faithful secretary who served ‘em all, from Sam Spade to Perry Mason. And the villains range from crime bosses like the Owl and the Kingpin to more exotic fare like Stilt-Man and the Exterminator.
(Daredevil - No Fear Factor Part 2)
Posted by Tukang Warta
Share to: