Johannes Gutenberg - Invention of the PRESS 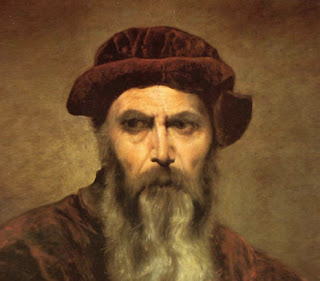 Johann Gensfleisch zur Laden zum Gutenberg was a German craftsman and inventor who originated a method of printing from movable type that was used without important change until the 20th century. The unique elements of his invention consisted of a mold, with punchstamped matrices (metal prisms used to mold the face of the type) with which type could be cast precisely and in large quantities; a type-metal alloy; a new press, derived from those used in wine making, papermaking, and bookbinding; and an oil-based printing ink. None of these features existed in Chinese or Korean printing, or in the existing European technique of stamping letters on various surfaces, or in woodblock printing.

Gutenberg was the son of a patrician of Mainz. What little information exists about him, other than that he had acquired skill in metalwork, comes from documents of financial transactions. Exiled from Mainz in the course of a bitter struggle between the guilds of that city and the patricians, Gutenberg moved to Strassburg (now Strasbourg, France) probably between 1428 and 1430. Records put his presence there from 1434 to 1444. He engaged in such crafts as gem cutting, and he also taught crafts to a number of pupils.

Some of his partners, who became aware that Gutenberg was engaged in work that he kept secret from them, insisted that, since they had advanced him considerable sums, they should become partners in these activities as well. Thus, in 1438 a five-year contract was drawn up between him and three other men: Hans Riffe, Andreas Dritzehn, and Andreas Heilmann. It contained a clause whereby in case of the death of one of the partners, his heirs were not to enter the company but were to be compensated financially.

Invention of the Press 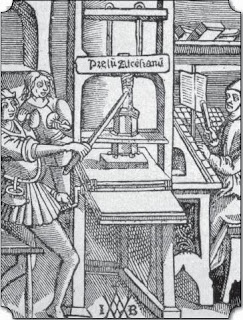 When Andreas Dritzehn died at Christmas 1438, his heirs, trying to circumvent the terms of the contract, began a lawsuit against Gutenberg in which they demanded to be made partners. They lost the suit, but the trial revealed that Gutenberg was working on a new invention. Witnesses testified that a carpenter named Conrad Saspach had advanced sums to Andreas Dritzehn for the building of a wooden press, and Hans Dünne, a goldsmith, declared that he had sold to Gutenberg, as early as 1436, 100 guilders’ worth of printing materials. Gutenberg, apparently well along the way to completing his invention, was anxious to keep secret the nature of the enterprise.

After March 12, 1444, Gutenberg’s activities are undocumented for a number of years, but it is doubtful that he returned immediately to Mainz, for the quarrel between patricians and guilds had been renewed in that city. In October 1448, however, Gutenberg was back in Mainz to borrow more money, which he received from a relative. By 1450 his printing experiments had apparently reached a considerable degree of refinement, for he was able to persuade Johann Fust, a wealthy financier, to lend him 800 guilders—a very substantial capital investment, for which the tools and equipment for printing were to act as securities. Two years later Fust made an investment of an additional 800 guilders for a partnership in the enterprise. Fust and Gutenberg eventually became estranged, Fust, apparently, wanting a safe and quick return on his investment, while Gutenberg aimed at perfection rather than promptness.

Fust won a suit against him, the record of which is preserved, in part, in what is called the Helmaspergersches Notariatsinstrument (“the Helmasperger notarial instrument”), dated Nov. 6, 1455, now in the library of the University of Göttingen. Gutenberg was ordered to pay Fust the total sum of the two loans and compound interest (probably totaling 2,020 guilders). Traditional historiography suggested that this settlement ruined Gutenberg, but more recent scholarship suggests that it favoured him, allowing him to operate a printing shop through the 1450s and maybe into the 1460s.

Printing of the Bible

There is no reason to doubt that the printing of certain books (werck der bucher, specifically mentioned in the record of the trial, refers to the Forty-two-Line Bible that was Gutenberg’s masterpiece) was completed, according to Gutenberg’s major biographers, in 1455 at the latest. It has been estimated that the sale of the Forty-two-Line Bible alone would have produced many times over the sum owed Fust by Gutenberg, and there exists no explanation as to why these tangible assets were not counted among Gutenberg’s property at the trial.

After winning his suit, Fust gained control of the type for the Bible and for Gutenberg’s second masterpiece, a Psalter, and at least some of Gutenberg’s other printing equipment. He continued to print, using Gutenberg’s materials, with the assistance of Peter Schöffer, his son-inlaw, who had been Gutenberg’s most skilled employee and a witness against him in the 1455 trial. The first printed book in Europe to bear the name of its printer is a magnificent Psalter completed in Mainz on Aug. 14, 1457, which lists Johann Fust and Peter Schöffer.

The Psalter is decorated with hundreds of two-colour initial letters and delicate scroll borders that were printed using a most ingenious technique based on multiple inking on a single metal block. Most experts are agreed that it would have been impossible for Fust and Schöffer alone to have invented and executed the intricate technical equipment necessary to executed this process between Nov. 6, 1455, when Gutenberg lost control of his printing establishment, and Aug. 14, 1457, when the Psalter appeared. It was Gutenberg’s genius that was responsible for the Psalter decorations. In the 1960s it was suggested that he may also have had a hand in the creation of copper engraving, in which he may have recognized a method for producing pictorial matrices from which to cast reliefs that could be set with the type, initial letters, and calligraphic scrolls. It is at present no more than a hypothesis, but Gutenberg’s absorption in both copper engraving and the Psalter decorations would certainly have increased Johann Fust’s impatience and vindictiveness.

A number of other printings used to be attributed to Gutenberg. They are now considered the work of other minor printers; among these is a Thirty-six-Line Bible printed in Bamberg, a typographic resetting of the Fortytwo- Line Bible. Attributed to Gutenberg himself is a Türkenkalender, a warning against the impending danger of Turkish invasion after the fall of Constantinople in 1453, printed December 1454 for 1455 use, some letters of indulgence, and some school grammars. The identity of the printer of a Missale Speciale Constantiense is still not established, but it was probably produced about 1473 in Basel, Switzerland.

In January 1465 the archbishop of Mainz pensioned Gutenberg, giving him an annual measure of grain, wine, and clothing and exempting him from certain taxes. His financial status in his last years has been debated but was probably not destitute.
Posted by Tukang Warta
Share to: