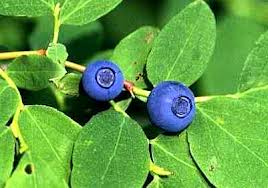 Cousin of the blueberry, the bilberry is the sweet, dark purple fruit of a branching shrub that seldom grows more than knee high. Ripe bilberries are a bonanza for birds and a heavenly treat for hikers to stumble upon in the forest. Most bilberries grow wild because the plants are difficult to cultivate. Given their wonderful flavor, it’s no surprise that bilberries have found their way into almost every imaginable culinary delight, from jams, pies, and tarts to sorbets, liqueurs, and wines. One Irish name for bilberry is fraughan, from the Gaelic word fraocháin. Traditionally, the berries are picked on the first Sunday in August, called Fraughan Sunday, which corresponds to an ancient Celtic harvest festival. According to legend, the more bilberries people collect on that day, the better the harvest will be. As it is a medicinal herb, bilberry has been used for centuries to control diarrhea and to improve circulation.

Bilberry has long been consumed as both food and medicine. The fruit is enjoyed for its sweet-sour taste and eaten fresh or cooked. Bilberry fruit is also made into syrup and used to treat diarrhea and other digestive problems. This is likely due to the presence of tannins, which have astringent and anti-inflammatory activity. Germany’s health authorities still approve of the use of the dried, ripe fruit for the treatment of acute diarrhea. However, the majority of research today is focused on the potential use of bilberry fruit for the prevention of age-related diseases.

Bilberry fruit is rich in anthocyanosides, plant pigments that have been shown to act as powerful antioxidants in the body.

Researchers have found that these powerhouse compounds may help protect the body from heart disease, oxidative stress, and inflammation and help preserve brain function and eye health. A growing body of evidence is linking oxidative stress, a condition associated with an increased level of free radicals and other oxidation-promoting molecules, to a number of age-related and degenerative diseases. Many fruits and vegetables help reduce oxidative stress, but it is bilberry—along with its American cousin, the blueberry—that is getting a lot of press. This berry’s anthocyanosides seem to have a particular affinity for the eye. Animal studies show that bilberry extracts protect the retina from damage. Two small double-blind, placebo-controlled studies have shown improvement in patients with diabetes- and hypertension-related retinopathy, a group of serious retinal disorders that can lead to blindness. Researchers are also looking at the potential protective effect that bilberry extract may have on colorectal cancer. In a study conducted at the University of Leicester in England, patients with colon cancer were given a bilberry extract for 7 days, and there was a 7 percent  decrease in cell growth in the tumors when they were surgically removed. This may be due to the ability of the anthocyanosides to prevent the growth of blood vessels in the tissue surrounding a solid tumor. The blood vessels are, in part, what allow the cancer to grow and spread.

Fresh berries: 1 cup per day of fresh fruit. American blueberries can be used if bilberries are not available.
Tea: Simmer 1 tablespoon dried berries in 2 cups water for 20 minutes. Strain. Drink ½ cup every 3 to 4 hours for diarrhea.
Extracts: Dosage range is usually 360 to 600 mg per day of an extract standardized to contain 25 percent anthocyanosides (also written as anthocyanins).

There are no known adverse effects. Bilberry benefits may be used as support for the eyes, heart, and gastrointestinal system but should not replace appropriate medical care.
Posted by Tukang Warta
Share to: