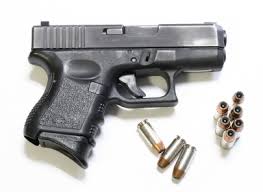 Gun in Japan - The number of Japan's population is only about 120 million today(by the time this article released), may also be reduced because many young people rarely marry and far fewer babies today, from the number 120 million is apparently only 122,515 registered firearms owners in the Japanese police.

That is the report from the White Paper (White Paper) Japanese National Police Agency (NPA) in 2012 issued recently.

lemari asam harga .adv - These notes are for the year 2011 where it says number of firearms in Japan only 246,783 tops only and are owned by 122,515 people. Of course, the firearms registered are circulating in the general population.

Interesting also disclosed that during the year 2011, 27 people who filed of a permit to be able to have gunfire have been rejected and license possession of firearms for 95 people have been revoked.

Japan is a developed country with the lowest shooting and gun ownership in the world.
According to the source, only police and yakuza who own the gun.  The reason why the number is low are:
Police sometimes come to the home of prospective licensing of firearms owners to investigate the situation and neighborhood around the candidate. If there is a problem in the environment, such as an argument with a neighbor, their applicant will be invalid. This condition feared could have been a firearm used as an attempt to resolve the quarrel.

Firearms mentioned above is actually not a gun or not a short-barreled guns like those of the police. Its prohibited for public to have it. The firearm that allowed is a long-barreled firearm for hunting purposes. Prohibition on possession of short-barreled firearms such as pistols banned in Japan since 1965. Firearms went to Japan sometime in the 1500's, among others through foreign merchant ships to Japan at that time.

Possession of a rifle for hunting purposes were very, very tight with all kinds of testing as well as written above.

Now a variety of gun ownership begins investigated further because there are expected nemuri-ju (sleep pistol), old that issued long time ago where the rule is not so tight just like now. Those who get caught will have their weapon taken by the police.

However, there is also some cases about firearms. For example, in July 2008 a 45-year-old-regular employee in Shikoku district, southern Japan, which is trying to extend his gun ownership license, arrested by the police because of his medical certificate was counterfeit. Of course he was eventually prosecuted and go to jail and or fines because of the deed forgery.

Severe punishment also makes yakuza reluctant to use it. They think that the use of gun not balance with its benefit compare with the punishment given. Moreover, there is a possibility the trouble will come in the form of “office raiding” if one of its members own the gun.

A case related to the issue above happened in December 26, 1997. The police stop a Mercedes Benz convoy belongs to Kaneyoshi Kuwata, boss of Yakuza clan called Yamaguchi-gumi. The police found a gun in the car in one of the gang in the Roppongi area. After a long trial, he sentenced to seven years in prison. This incident became jurisprudence, if any member of Yakuza gets caught carrying bullets or a gun, the punishment would be 7 years in prison or depending on the case anyway.

Another reason on why Yakuza reluctant to use gun in Japan is they will be called as coward if the enemy found out that they used a gun.
Posted by Tukang Warta
Share to: