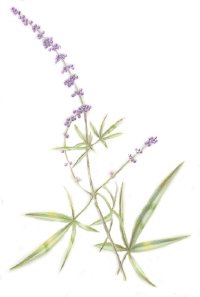 The following herb is good for your PMS syndrome, this herb called Chaste Tree. Chaste tree often suffers from mistaken identity. People may do a double take when they first glimpse the leaves of this small tree, as their resemblance to the leaves of marijuana (Cannabis sativa) is striking. A blooming chaste tree is also frequently thought to be a butterfly bush (Buddleia), because both plants produce long clusters of violet flowers beloved by bees, butterflies, and hummingbirds. The flowers are followed by small, fleshy fruits that contain dark brown seeds easily mistaken for peppercorns in both appearance and taste. These seeds are chaste trees’ link to chastity, forged more than 2,500 years ago. In ancient Greece, chaste tree was thought to calm sexual passion. It was an important component of festivals held to honor Demeter, the goddess of agriculture, fertility, and marriage. Women who remained chaste during the festival adorned themselves with the tree’s fragrant blossoms. The vestal virgins of ancient Rome carried twigs of chaste tree. The Catholic Church in medieval Europe later adopted chaste tree as a symbol of purity. Novitiates entering a monastery followed a path strewn with chaste tree blossoms. Chaste tree seeds, believed to suppress sexual desire, were ground and served in monastery dining halls to encourage celibacy—thus the common name, monk’s pepper.

Premenstrual syndrome
Breast tenderness (mastalgia)
Premenstrual syndrome (PMS) involves a number of physical, psychological, and emotional symptoms occurring 5 to 10 days before a woman’s menstrual period. It is estimated that up to 90 percent of women experience occasional PMS. The dried fruits of the chaste tree have been shown repeatedly to dramatically improve the symptoms of PMS. Germany’s health authorities recommend the herb for the treatment of PMS, menstrual irregularity, and mastalgia, or breast tenderness.

When the psychological symptoms of PMS are more severe (premenstrual dysphoric disorder), the condition is typically treated with antidepressant medication. A randomized, controlled trial found that chaste tree was roughly equivalent to fluoxetine (Prozac) for improving psychological and physical symptoms.
Chaste tree is sometimes recommended for women having difficulty conceiving. Chaste tree extracts, used daily for at least 3 months, have been shown to restore progesterone levels, which may improve female fertility. However, more investigation needs to be done before recommendations can be made.

Chaste tree appears to be extremely well tolerated in clinical trials. While no adverse effects have been reported in pregnancy, women should consult a health-care provider before using chaste tree for infertility.

Hope this herb can help to ease your pms syndrome :)