Smartest Animals on The Planet 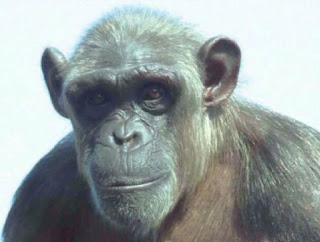 Think your brain separates you from the beasts? The gap is not as wide as you might think. This article will explain the list of smartest animals on the planet.
Humans are intelligent animals. We aren’t the strongest, nor the largest, nor the longest lived, but we flatter ourselves that we are the cleverest. In fact, it is so central to our sense of superiority thatwe assume intelligence automatically improves the survival chances of anyanimal. But, in fact, there is no good evidence for this. A brain is a very expensive organ to growand maintain - 20% ofthe food we eat every day is usedjust to keep our brain alive — and complex brains take a long time to fill with data before they become useful. Bacteria, plants and fungi have shown vastly more diversity and reproductive success than us without any intelligence at all.
But high intelligence does offer one important advantage: flexibility. Animals with simple nervous systems may be extremely good at what they do, but their behavioural repertoire is hard-coded within an arrangement of neurons that is fixed at birth. New behaviours can only emerge as a result ofthe pai nfully slow processes of mutation and natural selection. An intelligent animal is an improviser. New strategies to deal with changing conditions or newly conquered territories can emerge as required and successful techniques can spread through a family group or tribe by observation and imitation over days or weeks, while it would take generations for new genes to spread.

Most mammals are born with brains that are already 90% of their final adult weight. But to allow room for new behaviours, intelligent animals must begin life with brains that are still partially undeveloped. Newborn chimpanzees’ brainsare 54% of their adult weight; with dolphins it’s 42.5% and elephants 35%. So the elephant is the animal that learns most throughout life, after humans, who a re born withjust 28% oftheir adult brain mass.

In the Hitchhiker’s Guide To The Galaxy, Douglas Adams wrote that “Man had always assumed that he was more intelligent than dolphins because he had achieved so much — the wheel, NewYork, wars and so on —while all the dolphins had ever done was muck about in the water having a good time. But conversely, the dolphins always believed that theywere far more intelligent than man —for precisely the same reasons.” This neatly illustrates the problem of studying animal intelligence; we tend to measure it by how closely an animal’s behaviour resembles our own. We are gregarious, competitive builders, so relatively solitary, peaceful animals that don’t make anything, like whales and giant pandas, get dismissed in favour ofmore showy animals like chimpanzees and dolphins, which can learn behaviour.

To counter this, there are several traits that researchers look for when assessing the cognitive ability ofanimals. At the simplest level there are planning and problem-solving tests, such as maze puzzles. Then there is evidence of tool use in the wild. At one time it was believed that humans were the only animals to use tools, but there are now more than a dozen different species that have been observed using sticks, stones and thorns in various ways to hunt for food, swat flies or defend themselves. Even dolphins, which don’t have grasping hands or feet, are known to use conical sponges to protect their noses when foraging along the abrasive seabed.

Humans are not the only animals to lie, to cheat, to plan for the future, to appreciate beauty, to make toys or to show self-awareness. The more we learn about animals’ behaviour, the more intelligent they seem, as illustrated by our examples of some ofthe savviest and smartest species out there.

These primates have an intelligent and self-assured personality. Chimpanzees are our closest living relatives and so their intelligence is the easiest to understand and measure. In the wild, chimpanzees use tools, hunt co-operatively, display signs of mourning, romantic love, appreciation of natural beauty and complex play. Chimpanzees lack the vocal apparatus to manage human speech, but in captivity they have been trained to use and understand American sign language. There is still some scientific debate over whether chimpanzees actually understand the language or are simply responding to cues, but in one study a bonobo chimpanzee called Kanzi was asked a question he had never heard before: “Can you make the dog bite the snake?” Kanzi searched through his toys to find a dog and a snake, placed the snake in the dog’s mouth and closed it shut using his finger and thumb.
Chimpanzees have a sense of humour and their own version of laughter (a sort of panting sound); they are ticklish and use tickling in their play. They also use simple dollies, grooming and cuddling sticks or stones as if they were babies.
Intelligence rating:*****

Honeybees are highly social insects, with colonies of 30,000 or more. A single honeybee oniy has about 950,000 neurons in its brain, but ifyou consider the whole hive as a single diffuse entity, it has almost 3 billion to play with. The human brain only has 10 billion neurons. Honeybees returning to the hive use a special waggling dance to communicate their discoveries to other workers, and the colony uses a kind of democratic consensus to choose foraging locations and find a new site for the hive at swarming time. Studies show that this method consistently allocates workers in the most efficient way. Bees can also maintain a map of their surroundings in their head and will take the shortest route between multiple sites.
Intelligence rating:*** 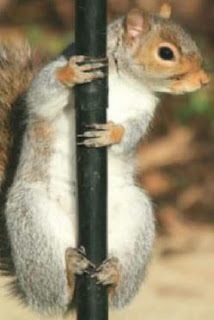 Squirrels have a reputation for being rather dizzy - burying nuts and acorns at random and promptly forgetting where. It turns out that this is just front. The biggest threat to a squirrel from other squirrels stealing their caches, so they make a big show of pretending to bury non-existent to fool would-be thieves. Studies  shown that the proportion of fake burials increases when the squirrel thinks it is being watched.
Intelligence rating:* 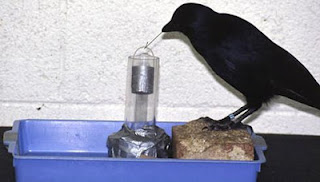 Crows are the most intelligent birds. The New Caledonian crow can fashion variety of tools by plucking and bending grass stems and twigs and use them to extract grubs and insects from their nests. In the lab, they will bend wire form a hook to extract a reward from a narrow jar. The hooded crow uses scavenged breadcrumbs as bait to catch fish. Crows injapan will drop nuts onto busy streets so that passing cars will crack the shells and then patiently.
Intelligence rating:** 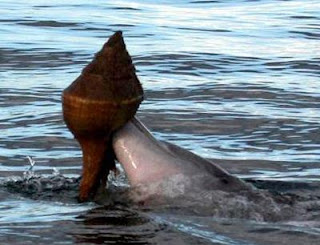 Bottlenose dolphins have larger brains than us. They hunt co-operatively and will assist injured family members or even human swimmers by keeping them close to the surface. Dolphins also seem to devote much of the irintelligence to inventing complex games. For example, they will swim rapidly in a circle and then blow air into the vortex created, so the bubble forms a doughnut shape. Sometimes they will admire their creation, othertimes they will chase it as it rises and bite it. Experiments usrng mirrors and playing vEdeo footage back to dolphins have shown some evidence that they may also be self-aware.
Intelligence rating:**** 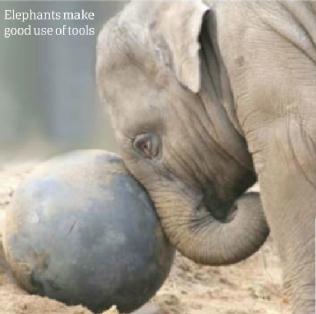 The elephant is obviously a very large animal, so you would expect it to have large brain. But the structure of an elephant’s brain is more surprising. The neocortex is as complex and has as many neurons as the neocortex of the human brain. This part ofthe brain is believed to be associated with intelligence and problem solving. Elephants also have the largest hippocampus ofanyanimal, including humans. The hippocampus is involved in the processing of memory and emotion. Elephants belong to very close-knit societies and have been observed burying their dead and standing over the grave, as ifin mourning. Theyalso make extensive use oftools to swat flies and will cover small watering holes with bark and sand to reduce evaporation.
Intelligence rating:**** 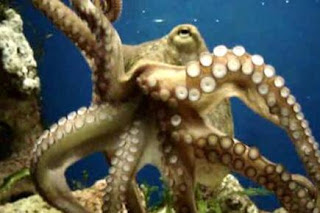 Octopuses only live a few years and have no contact with their parents, so they have to learn fast and teach themselves. They are the most intelligent invertebrate organisms, and studies have shown that they can mazes and be taught to unscrew jar lids. The nervous system ofan octopus is quite decentralised: two-thirds of its neurons are in the tentacles, allowing them to behave semi-independently. The veined octopus will pick up coconut shells and use them to build a protective shelter. This makes it the only invertebrate use tools. Octopuses also engage in play, catching releasing objects caught in circular currents.
Intelligence rating:*

So now you know the list of smartest animals on the earth.