0 magic, mystery, symbol 9/27/2014 01:00:00 AM
A+ A-
Print Email
Depending on your point of view, Abraxas is either an Egyptian Sun God who was adopted by the early Christian Gnostics, or a demon from Hell who is closely associated with Lucifer, although there is a case for the former, since he was not demoted to the ranks of a demon until the Middle Ages. 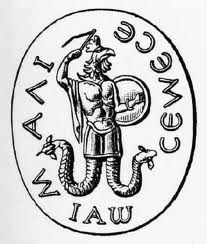 Abraxas was no ordinary god, however. As Ruler of the First Heaven he had dominion over the cycles of birth, death, and resurrection.

Whatever the case, the symbol for Abraxas is a very unusual one. He has the head of a chicken, the torso of a man, and two serpents for legs. He holds a shield in one hand and a flail-like instrument in the other. The image of Abraxas was carved onto stones (called Abraxas Stones) and the stone used as a magical
amulet. Occasionally Abraxas will appear driving a chariot drawn by four horses; these horses represent the elements.

This Abraxas symbol was adopted by the Knights Templar, who used it on their seals. No one knows precisely why this symbol was of particular significance, but a hidden secret within the name “Abraxas” may provide a clue.

In Greek, the 7 letters are the initials of the first 7 planets in the Solar System.

Further, if we apply numerology to the name then it adds up to 365, not only the number of days in a year but also the number of the spirits that those same early Gnostics believed were emanations from God.
Added to the mix is the speculation that the supreme magical word, “Abracadabra,” may derive from the name Abraxas, which means “harm me not.”
Posted by Tukang Warta
Share to: