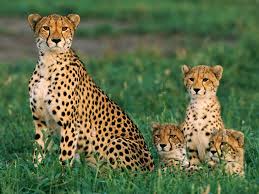 Not everyone knew the facts about cheetahs. Below are 5 top facts about this fascinating animal that will make you understand more about this beautiful creature.

Lightweight
The average weight of a cheetah is 125 pounds. This is actually a fraction of the weight of other big cats, with an average lion weighing more than 400 pounds.

Threat
All over Africa, Asia and India cheetah popiations ere in sharp decline. In 1990 there were roughly 100,000 individuals worldwide, now there are roughly 10,000.

Sexist
Baby cheetahs are brout up solely by the tamale parent, who raises them In isolation from any male. It takes roughly 18 months for a cheetah cub reach maturity.

Hakuna matata
Cheetah’s have a broad diet, ranging from antelope to springhare and game birds. However, one of their  most common food supplies is the slow and fat warthog.

Habitat
Cheetahs tend to favour vast expanses of land where prey is abundant and easy to spot. However, cheetahs can be found in a variety of habitats including grasslands.

Those are 5 top facts about cheetahs that you should know.
Posted by Tukang Warta
Share to: