The Ritual of Bakar Tongkang, The Only In The World 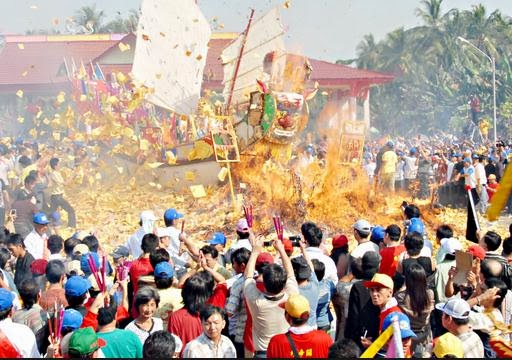 The ritual of bakar tongkang (burning barge) is a leading cultural tour of Riau Rokan Hilir (Rohil). This ritual has become a national and even international travel. This ritual is even claimed to be the only one in the world.

The ritual of bakar tongkang is the story of people of Chinese descent who fled from the ruler of Siam in the 19th century. In the ship led by Ang Mie Kui, there are a statue of God Kie Ong Ya and other five gods, which their commander called Tai Sun Ong Ya.

lemari asam lokal berkualitas .adv - The statues of these gods they had brought from the land of China, and according to their belief that the gods will provide safety in shipping, until they finally settled in Bagansiapiapi Indonesia.

To honor and celebrate the prosperity and safety which they obtained from the sea as the main livelihood of Bagansiapiapi Chinese community, then they burn junk (barge) which performed each year. The procession was held on the 16th of Fifth month in the lunar year.

Several other sources mentioned that the ritual of bakar tongkang is a ritual worship to commemorate the birthday of the God Kie Ong Yeah (God of the Sea). This ceremony has its own characteristics and can’t be found elsewhere in Indonesia.

Based on the custom, the replica ship that measures 8 x 2 meters, first paraded around Bagansiapiapi before burning. Residents of Bagansiapapi also welcomed this ceremony by putting lanterns and painting gods in their homes.

After the parade, a replica of the barge was brought to the temple Eng Hok King, the oldest place of worship Confucius community located in the center of the city. In this temple, the prayers said over the gods so that this activity can be blessed. Residents asked to always be the safety and waged over all the affairs.

Once be lodged overnight in the temple, on the next day, they began to burning barge. Thousands of people each were carrying several paper containing prayers that is put around the barge. It is intended that the prayers they wrote on a yellow paper was granted by the Gods.

The burning barge (bakar tongkang) procession carried out in a place not far from the temple. From year to year, visitors of this ritual increase. Not only Chinese from Indonesia, but also from neighboring countries, such as Malaysia, Singapore, Thailand. (intisari-online.com)
Posted by Tukang Warta
Share to: