Lo Siaw Ging: The Doctor Without a Rate 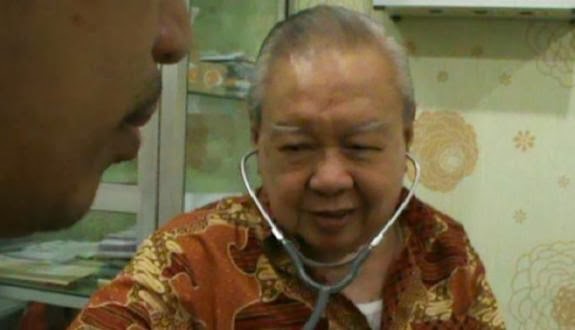 His full name is Lo Siaw Ging but he is better known as Doctor Lo. In Solo, Central Java, this 78 year old doctor of Chinese descent is popular not only because he provides diagnostics and drugs that are always right, but also because he has never asked for a fee from the patients.

Every day, except Sunday, dozens of patients line up in the waiting room of his office. They come from various backgrounds, ranging from pedicab drivers, street vendors, factory workers, private employees, public servants to entrepreneurs. The patients does not only come from Solo but also from surrounding towns, such as Sukoharjo, Sragen, Karanganyar, Boyolali, Klaten and Wonogiri.

Doctor Lo is considered special because he never put up rates. He also never distinguish the rich and poor patients. He actually gets angry when patients ask for the checks, even though they don’t have any money. In fact, apart from not charging for his services, often or not Doctor Lo assist patients who are unable to pay for a prescription. He will write a prescription and then ask the patient to pick up the drugs from the pharmacy without having to pay. At the end of each month, the pharmacy will charge the price of the drugs to the doctor.

This treatment is not only for his patients only but also for hospitalized patients at the hospital where he works, RS (hospital) Kasih Ibu. As a result, Lo would have to pay prescription charges between Rp 8 million to Rp 10 million per month. If the cost to treat a patient is too much, for example, had to undergo surgery, Lo would not give up. He will subsequently find donors. Not just any donors though as Lo will only visit donors that would be willing to not be named.

“Fortunately, there are still many who believes in me”, he said.

In the eyes of the patients that are not capable, Doctor LO is like an angel helper. He overturns the logic of having to pay for health care that are often unaffordable for the poor. What Lo has done denies idioms such as “poor people are not allowed to be sick”.

“I know which patients can afford to pay and which patients can’t. What’s the point of paying fees for doctors and drugs and then wouldn’t be able to buy rice? It’s a shame if their children could not eat”, he said.

lemari asam lokal berkualitas .adv - His firm way of speaking is often considered stern. He often scolds patients that underestimates their diseases. He said that he once scolded a mother because she just took her children to the doctor after experiencing high fever for four days.
“There are still many people who behaves like that. It’s as if the disease could be cured by itself. When you’re ill then you have to go to the doctor right away. Do not make your own diagnosis”, said the 3rd out of 5 siblings.

Yet despite his stern ways, Lo is still loved. He became a reference point for treatments, especially for those that cannot afford them. However, the doctor that graduated from the University of Airlangga felt that what he did was not anything out of the ordinary and should not be exaggerated.

“The duty of doctors is to help patients to be healthy again. In whatever way. I only help those who are in need of medical help. It’s nothing special”, said the doctor who opened the practice in his home, in the village of Jagalan, Jebres, Solo.

Born in Magelang, August 16th, 1934, Lo grew up in a moderate family of tobacco entrepreneurs. His parents, Lo Ban Tjuang and Liem Hwat Nio, gave freedom to this children to choose what they want to do. One example was when Lo decided to go to high school in Semarang, as he believes that there were no good high schools in Magelang at the time.

After graduating high school, Lo expressed a desire to study in medicine. At that time, his faster advised that if he wanted to be a doctor then he shouldn’t be an businessman. Conversely, if he wanted to be an businessman then he shouldn’t be a doctor. Apparently, that advice left a big impression in Lo’s heart. From that advice, Lo believes that a doctor should not pursue material alone because the task fo a doctor is to help people that are in need. If you want to pursue profits, then it’s better if you’re a businessman.

“So whichever patients that come here, poor or rich, I have to serve them well. I help people without discrimination. Everything should be done with sincerity. The medical profession is to help the sick, instead of selling drugs”, says the husband of Gan May Kwee.

Being a doctor since 1963, Lo began his career at the Tsi Sheng Yuan clinic owned by Doctor Oen Boen Ing (1903-1982), a legendary doctor in Solo. During the new order, this clinic developed into RS Panti Kosala and is now renamed RS Dr Oen.

“He’s not just smart at treating people but he’s also simple and has an incredible social life”, said the former Director of RS Ibu Kasih, Solo.

What Lo said about helping anyone who needs it is not nonsense. When the May 1998 riots happened, for example, Lo remains open for practice. Whereas his neighbors asked him to close due to the dangerous situation, especially for those citizens of Chinese descent. However, Lo still accepts patients who come. The neighbors that are worried eventually guarded Lo’s house.

“Many are in need of help, including the victims of the riots, there’s no way I would reject them. If all doctors cap, then who will help them?” said Lo who also graduated from Hospital Management and Administration (MARS) from the University of Indonesia.

Until the unrest was over and the situation was safe, Lo’s home was never touched by the rioters. Though the surrounding houses were looted and many were burned.

Now, even though he is nearly 80 years old, Lo does not reduce the time to keep serving patients. Every say, starting from 6:00 AM to 8:00 AM he practices at home. Furthermore, from 9:00 AM to 14:00 PM, Lo would meet the patients at RS Ibu Kasih. After a break of two hours, would return to his home and open practice again until 20:00 PM.

“As long as I’m still strong enough, I’m not going to retire. A retired doctor is when you’re not able to do anything anymore. It gives me great satisfaction to help others and you can’t pay that with money”, said the doctor that since a few years ago has started walking with a cane.

According to Lo, his wife plays a big role in what he’s doing. Without his wife, Lo said he wouldn’t be able to do everything.

“She’s an extraordinary woman. I’m lucky to be her husband”, said Lo about the women that he has married since 1968.

Decades of being a doctor, and even served as a Director of a large hospital, Lo’s life remains simple. He lives in an old house with his wife that remains relatively unchanged since the beginning of construction, apart from re-doing the paint. He doesn’t live in storied mansion as most doctors do.

“This house is big enough for the both of us. If there is more income, let it be for those who are in need. We only need food. To become healthy at this age alone makes me very grateful. The longer I live, the more chances there are to help others”, said Lo, who hasn’t been blessed with children after 43 years of marriage.
In the midst of expensive drugs, hospital services are often annoying and doctors often prioritize material, whereas Lo’s presence is like soothing Dew. It seems that there are not a lot of doctors like Dr. Lo.
Posted by Tukang Warta
Share to: