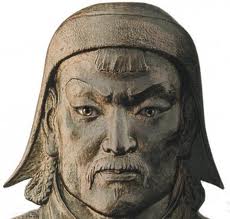 Mongolia nation is nomadic tribe who live in yurt (hut of felt) in middle Asia which is still exist till today. In the year of 1180, a young boy of Mongolia on the age of 13 years old has been elected as a Khan (leader) of the tribe. His name is Temujin. He immediately became a great leader and at year of 1206 he was given the title as Genghis Khan (The leader of all nation).

Genghis Khan was a great warrior and ruthless. His forces make opponents fear and kill everyone. Genghis horse archer army can kill within 180 meters when riding at full speed. They also ever rode as far as 440km over three days.

Within four years(1210-1214), Genghis Khan conquered northern China, and many parts of India and Persia. His empire extended from Korea to the Caspian.

After he passed away, his son – Ogodai - messed Armenia, Hungary and Poland. The grandson of Genghis Khan – Kublai Khan –conquered other parts of China in 1265 and appointed himself as the first line of Mongol emperor of China called Yuan. Yuan dynasty last till 1368.

Kublai governance in China is very hard, but he was much admired Venetian explorer, Marco Polo. Kublai Khan established the new capital, called Ta-tu and now this place known as Beijing. In his era,
Kublai Khan adopted the Chinese government and the ruling is so efficient that China became very wealthy.
Posted by Tukang Warta
Share to: