Martin Bormann, the Secretary behind the Might of Hitler and the Nazi’s 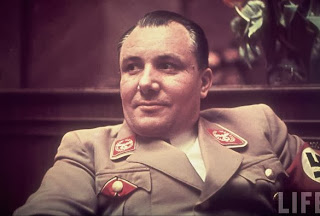 The might of Nazi Germany and its leader, the Fuhrer, Adolf Hitler, can no longer be doubted. However, all this might not have happened if it weren’t for such an important figure named Martin Bormann.

Martin Bormann was responsible for preparing speeches, organizing meetings, simplifying administration and was even directly involved with the wedding process, the making of the will and the suicide of Adolf Hitler.

All that responsibility will not have been bestowed upon Bormann if he wasn’t one of Hitler’s most trusted acquaintance. His official duty was as Hitler’s personal secretary, where his influence was as if he was the manager of the German Chancellor.

Bormann was born on June 17, 1900 in Wegeleben, near Halbersdatd, Germany. His father was a Sergeant who later turned into a post office employee. As a result of difficult conditions, Bormann was forced to drop out of school as a teen and had to work at a farm in Mecklenburg.

In 1924, with Rudolf Hoss, Bormann was sent to prison for a year in the involvement of the brutal killing of Walter Kadow, who was suspected of treason. After his release from prison, Bormann joined the NSDAP in the town of Thuiringia. Here is where his career excelled as a business manager in 1928. His position made him close to Hitler.

On the way to becoming Hitler’s right hand man, Bormann, who was good at business, raised a campaign titled “The Adolf Hitler Endowment Fund of German Industry”, and successfully generated a large amounts of funds. In one meeting, Hitler said “To win this battle, I need Bormann!”

He was the appointed as Hitler’s personal secretary and thus completing Bormann’s career as Hitler’s right hand man. His influence was so great that historians believed that Bormann was behind the events of the holocaust against the Jewish.

Throughout his life, Bormann was known as someone who was ruse, anti-Semitic, racist and against the church. However, he is also known as the master of deception.