Unique! Football jersey with a picture of Che Guevara 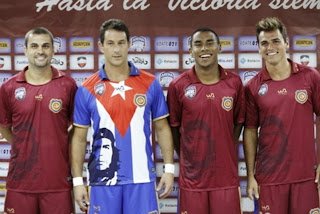 The figure of Che Guevara is very interesting. It is not wrong if there are shirts, hats, or other attributes with the figures of Cuban revolution’s face attached. But what would happen if football clubs jersey with a picture of Fidel Castro’s colleague?

Madureira did have a special affinity with Cuba. Fifty years ago, the club toured to that Caribbean country
Che Guevara's image costume became a symbol for the 50th anniversary of the tour.

Because of the uniqueness, as reported by the Mirror, the club's jersey sold about three thousand pieces since it has been released. In fact, Madureira jersey usually only sold 10 pieces per month.

“Until the manufacturer can’t fulfil the demand”, said the Club President, Elias Duba.

Especially for Goal Keeper’s jersey made different by country flag motive identical with the Fidel Castro. "Even the opponents fans wanted to buy it," Robertinho joked.
Posted by Tukang Warta
Share to: